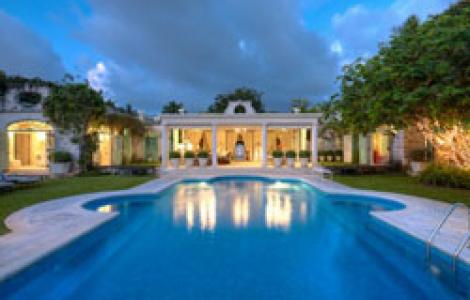 For holiday makers, the word Barbados sums up a world of exclusive indulgence, of blue skies and endless sands, of private pools and white shuttered villas.  This five-star idyll is, of course, all about a sense of timeless magic, and Oliver Messel is perhaps the greatest magician ever to cast his spell on these shores.  Messel was, for much of the 20th Century, better known as one of England's foremost theatrical designers, but it was the houses he designed during the 1960s and 1970s that are perhaps his most lasting legacy.  Even today, more than 30 years after his death, to own a Messel property is to own a masterpiece.

Leamington Pavilion, located on the West Coast of Barbados, is one such property.  The opulent beachfront villa, set within two acres of lush, tropical gardens, provides a magical setting ideal for families or groups looking for a more personalized holiday alternative to the larger hotels on the island.  The timeless essence of Leamington’s refined yet unpretentious elegance is reminiscent of its past, when famed movie stars Greta Garbo and Claudette Colbert dined under the Caribbean stars, and glamour juxtaposed effortlessly with relaxed island-style living.

Designed by Oliver Messel, famed English stage designer and architect, Leamington is a fine example of his distinctive style, expertly merging the interior and exterior living spaces to create an idyllic tropical setting for refined island living and entertaining.  Messel discovered Leamington when he stayed at the villa in the 1950’s; he found it so enticing that he persuaded his friends Dru and Jack Heinz (of Heinz Foods) to purchase the estate.  Mrs. Heinz then commissioned Messel to rebuild the Pavilion, and his signature style transformed Leamington into one of the most stunning properties on the island today.

To read more about Oliver Messel and his Caribbean masterpieces, including Leamington Pavilion, an exclusive holiday home available through West Coast Villas Sotheby's International Realty, please download the PDF of the full article.