5 of the best Bajan dishes plus a drink (with recipes) 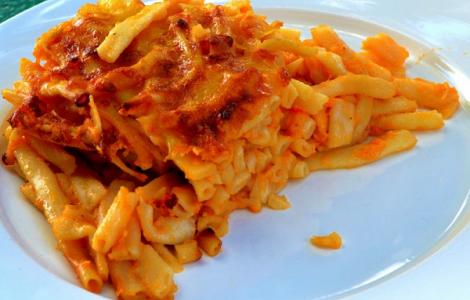 Cheesy 'Pie' is one of the most popular foods in Barbados and is served all over the island. The Bajan version is made with macaroni tubes rather than elbow macaroni.

Bring salted water to a boil in medium saucepan. Break the macaroni tubes into thirds and add to the boiling water. Cook uncovered until macaroni is tender but still firm.
Preheat oven to 350F (180C).
Drain the macaroni and return to the saucepan.
Add the onion, cheese, milk, ketchup, mustard and egg. Add salt and pepper to taste. Herbs such as marjoram and thyme can also be added.
Pour into a greased dish and top with more grated cheese. Fine breadcrumbs can also be added as a topping.
Bake for 30/40 minutes or until golden brown.

In a heavy frying pan, heat the oil and saute the onions until they are just wilted.
Place flour, baking powder and salt in bowl. Make a well in centre and pour egg, butter and milk
Mix together lightly, then add the onions, eschalot, salted cod fish, salt and pepper.
Stir well. Drop by the tablespoon full into hot oil, but do not crowd them in the pan.
Cook for about three to four minutes until they are golden brown on both sides.
Remove from pan and drain on absorbent paper. Serve very hot.

Two or three breadfruits
Coconut oil (for frying)
Salt: (to add to the salt)

Mix salt, water, and turmeric and keep aside.
Peel the outer green covering and the stem with a knife....it is quite thick so a knife is a must.
Cut the fruit into half and cut each half further into 4 slices (if you want smaller chips cut the strips smaller).
Now remove the middle portion with a knife.
Slice the breadfruit chunks into thin pieces about 24 inches long

Heat coconut oil in a large wok and put small batches of the sliced fruit into it
When it gets crisp put in 1 tsp of the salt solution and when the sizzling sound stops, strain out the fried chips and place it on a paper. If you like the chips to be spicy just add 1/2 tsp of red chilly powder and toss the chips.
Serve immediately or store in airtight container for up to 2 weeks.

Combine the raw fish, lime juice, salt and water in a bowl. Allow to sit for 10 - 15 minutes.
Rinse the fish and cover in seasoning. Place the flour in one plate, the breadcrumbs in one plate and the eggs (beaten with salt and pepper) in another bowl. Pour the oil in a frying pan to just cover the bottom (about a 1/8 - 1/4 inch layer) and heat
First coat the fish in flour, then egg, then breadcrumbs and then place in the oil to fry until golden brown.
The fish will 'curl' as it heats, so be sure the place the fish 'black' side down in the oil.

Interesting fact: Punch comes from the Indian word "panch" which means five. Five refers to the five ingredients of sour, sweet, strong, weak and spice. The poem for rum punch goes: One of sour, two of sweet, three of strong and four of weak, a dash of bitters and a sprinkle of spice, serves well chilled with plenty of ice.

Place two measures of sugar in a saucepan with a little water and cook until the sugar has dissolved and add to the juice.
Add the rum and water. A good quality passion fruit juice can be used instead of water but reduce the syrup slightly.
Serve with plenty of ice, a dash of bitters and a grating of nutmeg.